I have always stood by my love for cliffhangers. I love when an author rips my heart out and stamps all over it and keeps me coming back for more. My Bound series has a few of those endings. Clouded Hell is a standalone, it wraps up nicely with a bow. But I knew this was coming. I knew my sins as an asshole would come back to bite me in the ass one day and they have.

I have all the emotions now and probably a year to wait until the next book comes out. I picked up V.E. Schwab’s A Darker Shade Of Magic because I was asked by a friend if I’d ever read her. I hadn’t and I’m a sucker for a well written fantasy. (Little known fact I used to strictly write fantasy before I ever wrote a romance novel) Fantasy is my escape. If I need to get away from the world or my own head I always go back to fantasy.

From the first chapter Schwab hooked me. I loved the idea of mutable Londons and Kell’s coat. Rhys— I can’t say enough. Without giving anything away, I ship Rhys with more than one person. And Lila she is what female characters should be. She doesn’t take an ounce of shit, she cross dresses and she owns who she is. I dove into the second book (A Gathering Of Magic) as soon as it came out and I wasn’t disappointed. The energy was even more intense than the first book. I tired to take it slow, and savor the book, as I knew it would probably be a year before I got another book. Alas, I could not stop.

Now I sit here in what is probably self imposed karmic hell, trying to find a book to appease me and there is nothing. I want to go back to Red London. I want to write fan fiction about Rhys. (Which I’ve never done before. Not even for Harry Potter.) I won’t because I have no time, but these are just a few of the things running through my head as I suffer book hangover. I dare say, I’ve never seen better world building. It was masterful. It was a fully formed universe without ever too much telling or feeling like I was pulled out of the story for an explanation.

So now, I will go back to my own writing with a lesson. One I’ll probably continue to ignore because I’m a sadist asshole who loves to torture characters, but I’ve felt my own sting.

Here is an excursive excerpt from me torturing Remi and Dante in Clouded Hell. (It really didn’t take me long at all to get back on the wagon)

His eyes raked down my body, and his breath hitched as his eyes landed on the scar on my chest. I let him watch as I removed my jeans and boxers. Now he was pulling at the ties at his wrists, the muscles in his shoulders tightening. I closed my eyes and climbed over him. With a quick flick of the knife, I cut his hands free and then lowered myself to him.

I’d never get over him. There wasn’t a chance in this clouded hell. 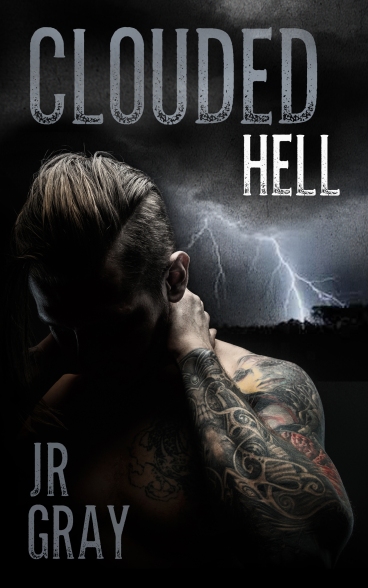 I survive on avoidance. Physical pain to avoid the mental. Disposable flesh to avoid relationships. Work to avoid attachment. My club became my empire of avoidance. Inside the ring millions are won and lost. The fight is confined to breaths, actions and reactions, fists and pain. Rules don’t exist. Only my opponent exists.

I’d been avoiding my needs for far too long when Remi stumbles into the Inferno and I’m hungry. The promise of a submissive with no attachment is far too tempting. I can’t resist him. He was only supposed to be a distraction, but I know I’ll never get over him. There isn’t a chance in this clouded hell.